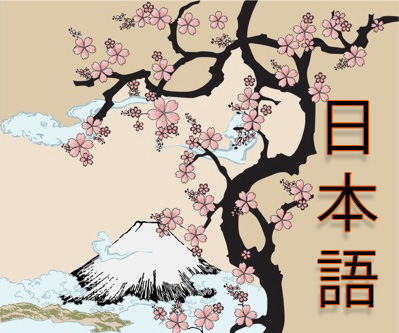 Japanese is almost the only language spoken in Japan which, with a population of more than 125 million, is one of the most linguistically uniform countries in the world: 99.2% of its citizens are mother tongue speakers of Japanese in its various forms. Official Japanese, from Tokyo, has gradually spread over the entire country due to the influence of the mass media; many local dialects are still in use, however, including the dialects of Kyoto and Osaka, which are still highly regarded. There are many theories about the origins of the language: Japanese syntax is close to that of some Altaic languages like Turkish and Mongol, but is also very similar to Korean.

The language is also spoken in areas of Japanese immigration like Brazil, Hawaii, California, Guam, the Marshall Islands and Palau.

Japanese uses Chinese ideograms, the kanji, each of which expresses a concept. It is estimated that there are almost 50,000 kanji. Luckily, a list of 2,000 basic kanji, called joyokanji, was set up in 1981. However, this system is complemented by two forms of phonetic alphabet, hiragana and katakana, a set of syllabic characters which represent all the basic sounds of the language, and which cannot be broken up. Hiragana, mainly used by women in ancient times, is composed of 48 characters and is used above all for words of Japanese origin and often Chinese origin words which cannot be written in the characters officially approved for general use.

Katakana also uses 48 characters. It is mainly used for foreign words derived from other languages than Chinese, as well as onomatopoeias, scientific names, modern technological words, or for special stylistic purposes.However, there is a Romanised version of Japanese script, introduced in the 16th century, which is used to facilitate relations with Westerners.

Can you write in Japanese using a PC running a western language operating system?

Yes, you can use IME (Input Method Editor), which enables you to write complex characters (like Chinese, Japanese, Korean, etc.), using a western language OS and keyboard. IME is generally used in reference to Microsoft Windows. Other operating systems may use different acronyms, like Input Method for Mac OS, FEP for MS-DOS, or XIM for X Window System.

When translating into Japanese, must proper nouns and abbreviations be transliterated?

In many cases it is best to transliterate proper nouns (e.g. personal names), i.e. reproduce the original sound of the name using the characters of the most appropriate alphabet. As for abbreviations and tradenames, it is best not to change them. It is best to check the suitability of a transliteration in each case.

Does Japanese have upper and lower case characters?

No, the ideograms are not affected by this distinction.

Does Japanese use italic and bold typefaces, etc.?

Yes. Bold and italic are both used in Japanese and now, thanks to continuous improvements in Japanese text editors, there is no need to change font.

Is Japanese only written from left to right, or are other options available?

Japanese may be written horizontally (left to right) or vertically, but in the latter case it also reads from right to left.

Books, magazines and newspapers are usually written vertically. If this is not the case, and they are written horizontally, the direction of impagination is usually maintained (right to left), so that most books and comics (manga) open and are read in the opposite direction from Western texts.

Are there rules in Japanese for splitting words into syllables?

No, there are no rules for this. When laying out a text, a sentence can be split as desired at line breaks.